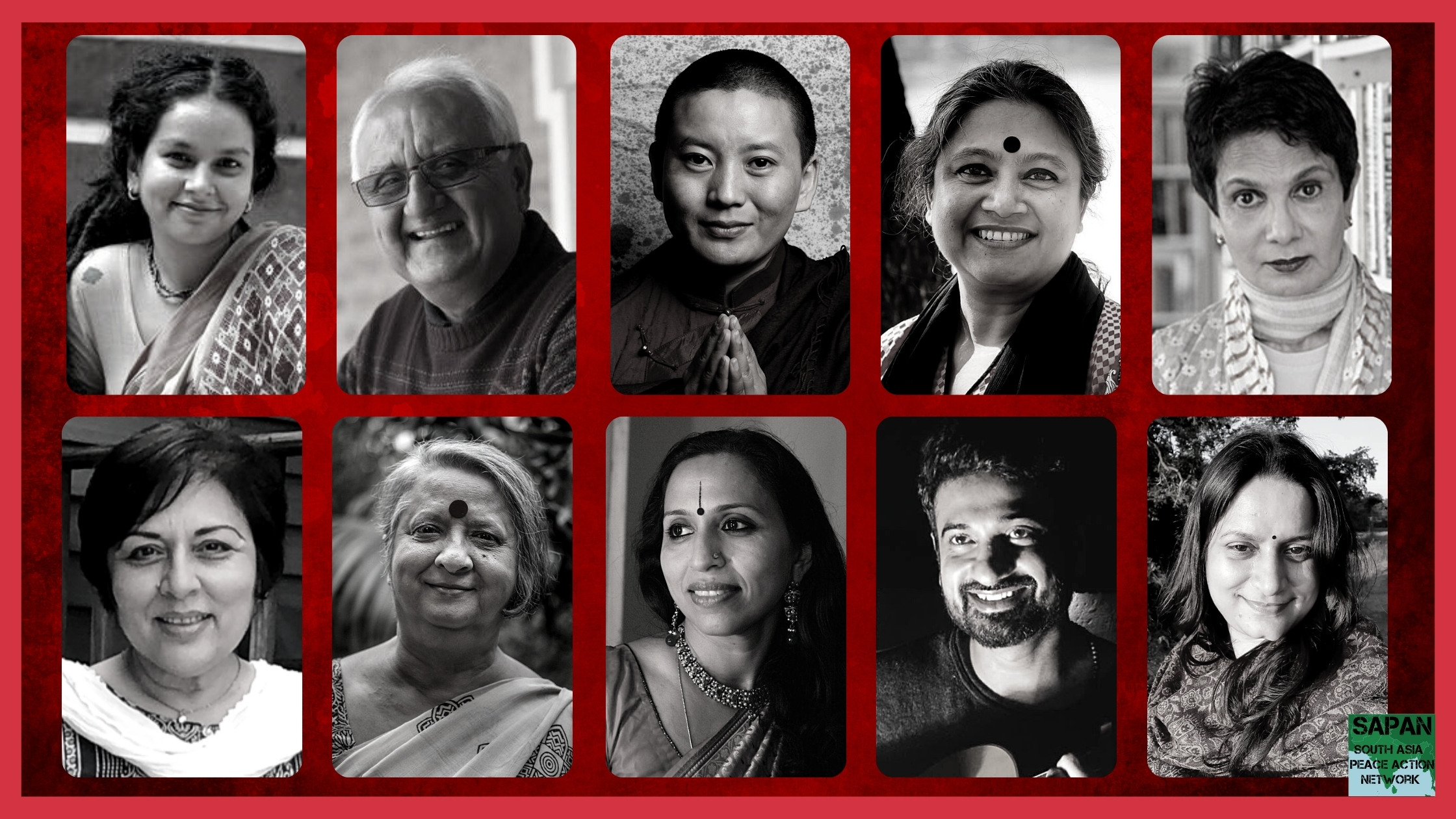 Prominent artists from across Southasia will meet online to share perspectives on “Mystics and Music: Southasia’s Legacy of Love“, Sunday, 27 February 2022, organised by Southasia Peace Action Network, or Sapan.

Khushi Kabir, social activist, feminist and environmentalist from Dhaka and a Sapan founder member, will host the event. Sohana Ahmed from Dhaka will present a tribute to the late Lata Mangeshkar. Journalist Kanak Mani Dixit will moderate the panel with Ani Choying from Kathmandu, Kerala/Bengal-based Parvathy Baul, Saif Samejo from Sindh, and Vidya Shah from New Delhi.

The renowned oncologist Dr. Azra Raza at Columbia University, author of The First Cell and authority on the poet Ghalib, will present the Sapan Founding Charter that spells out the goals and ethos of the host organisation.

This is Sapan’s eleventh monthly webinar since its launch last March. Past discussions have focused on a range of issues from the climate crisis and the rights of those in jails across Southasia, to gender-based violence, public health and human rights.

Sohana Ahmed in Dhaka did her Masters and Ph.D. on Hindustani Classical Music  from the University of Delhi. She will present the late Lata Mangeshkar’s songs in Bangla, in tribute to the late music icon

Ani Choying Drolma is a singing nun from Kathmandu who performs globally, carrying the message of empathy and compassion through Himalayan Buddhist spiritual hymns and mantras. She is also a popular exponent of Nepali music. Ani Choying is philanthropically engaged in numerous activities including a school for young nuns, a dialysis centre, earthquake recovery, and women’s entrepreneurship.

Kerala/Bengal-based Parvathy Baul is a performer and teacher of the Baul tradition, as also an instrumentalist, storyteller and painter. Her oeuvre emerges from being part of a lineage of master Baul singers, dancers and spiritual teachers.

Saif Samejo is a musician and songwriter from Jamshoro, Sindh. Annually, he organises Pakistan’s biggest international Folk and World Music festival, Lahooti Melo. He has collaborated with artists across Southasia including Ani Choying Drolma.

Singer and scholar Vidya Shah brings a rare combination of classical music and academic depth to her performances. She has been recognised and awarded most recently for her series “Women on Record”, highlighting the contributions of women performers of the gramophone era. Vidya’s Bollywood debut was a duet with Ustad Rashid Khan in Nandita Das’s film Manto.

Discussion moderator Kanak Mani Dixit is a Nepali publisher, editor, writer, and activist who campaigns for open urban spaces, conserving built heritage, and Southasia regionalism. Founder of Himal Southasian magazine and cofounder of Himalmedia, he is a recipient of the Prince Claus Award of the Netherlands, and a Sapan founder member.

The discussion also features a showing of acclaimed filmmaker Shabnam Virmani’s recently released short documentary Don’t Fall in Love with Those who Wander in Boats.

Physician and activist Fauzia Deeba from Quetta/New Jersey and researcher Pragya Narang from Jamshedpur will present In Memoriam to commemorate lives lost in past month and pay tribute to the visionaries of peace movement in Southasia. Peace activist Lalita Ramdas, based in Alibag village south of Mumbai, will add the closing remarks.

Sapan is a coalition of individuals and organisations calling for a regional approach to human development and social justice, reduced geopolitical tensions in the Subcontinent, and a visa-free travel to revive historical links between the peoples of Southasia. The upcoming event is part of our series ‘Imagine! Neighbours in Peace’, a title borrowed from an unpublished volume by Chowk.com. Videos of previous Sapan events are available at our YouTube channel and Facebook page.

Journalists and others wishing to join the event may register at this link with the email address they plan to use to join the meeting.

The event will also be broadcast on Facebook Live at this link.