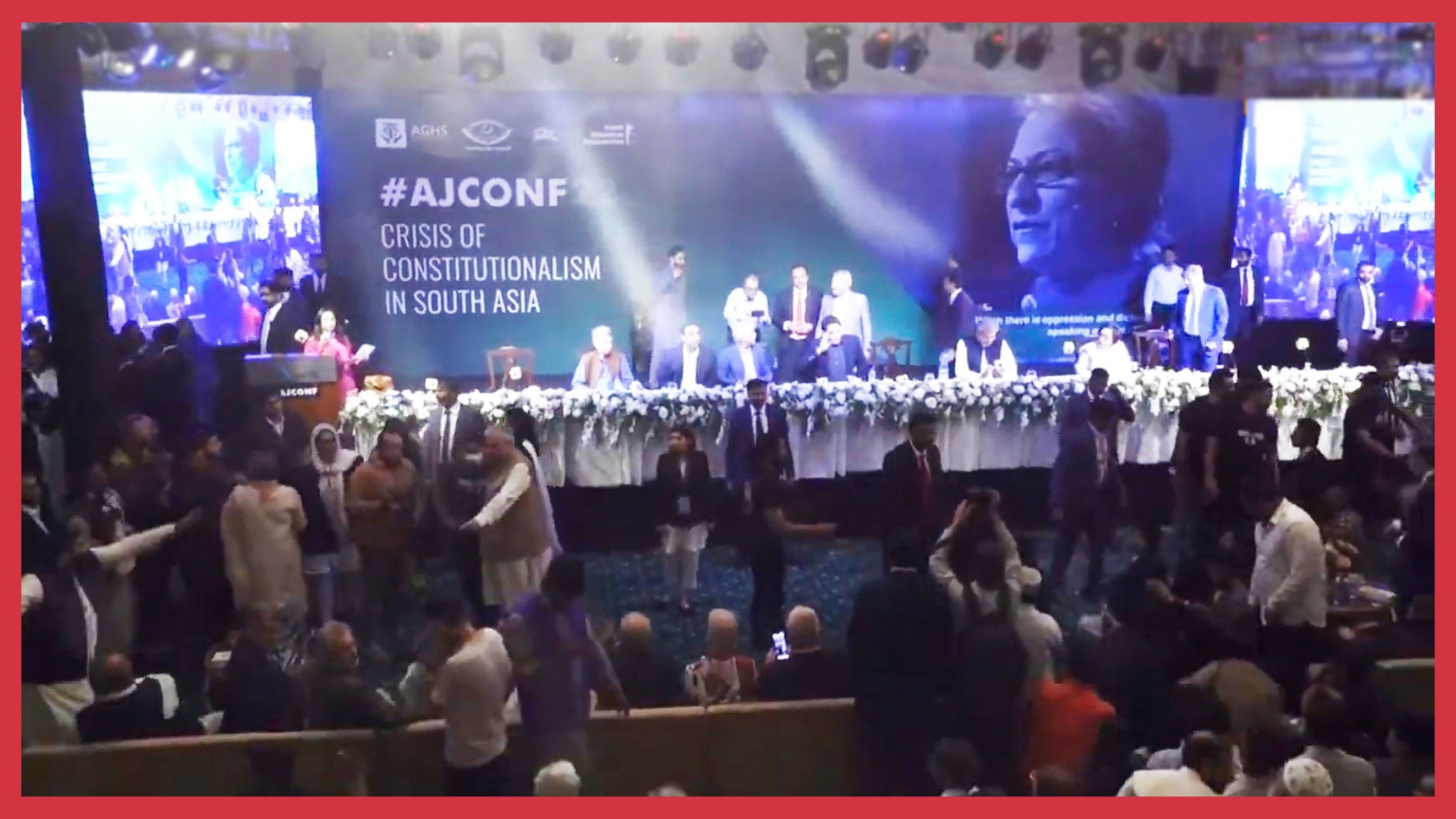 By Abdullah Zahid and Beena Sarwar

October 26, 2022: The drama began well before the start of the fourth Asma Jahangir Conference on ‘Crisis of Constitutionalism in South Asia’, held last weekend in Lahore.

When Steven Butler of the Committee to Protect Journalists (CPJ) landed in Pakistan for the conference, he found himself detained for eight hours at the airport.

The detention appeared to be the “result of a breakdown in communication” between the Pakistan government and the interior ministry that had approved his visa, said the New York-based activist.

Someone apparently forgot to inform the FIA, the Federal Investigation Agency that monitors airports, that Butler was no longer on the no-entry list of the Interior Ministry.

This was deja-vu for Butler, but not as bad as what happened in 2019. Then, he was not only detained but also deported from Lahore airport on arriving for the Second Asma Jahangir Conference. Pakistan’s ruling dispensation was unhappy with Butler’s opinion piece in the Washington Post published earlier, on the censorship ‘overdrive’ in the country.

The drama continued after the conference with a treason case registered against another panellist, Manzoor Pashteen, whose nascent organisation the Pashtun Tahafuz Movement or PTM aims to protect Pashtun youth from stereotyping and extrajudicial killings.

Ironically, the late Asma Jahangir’s last public appearance and speech were at a demonstration led by Pashteen in Islamabad, February 2018, against the extrajudicial killing of a Pashtun youth in a ‘police encounter’ in Karachi in January 2018. The protest marked the launch of the PTM. Jahangir passed away just days later at her home in Lahore.

Since then, Pakistan’s mainstream media has all but blacked out this ‘social media-powered, youth-led movement’. No one takes responsibility.

The treason case against Pashteen has sparked an outcry in Pakistan. This is not the first time Pashteen and his friends have faced such charges.

The detention of Butler and the case against Pashteen are ironic given their links to a conference aimed at taking forward the legacy of the iconic human rights advocate Asma Jahangir.

The annual event was instituted in 2018, a few months after Asma Jahangir passed away. Her clear, courageous voice and vision are needed today more than ever before, say human rights activists and legal experts.

The tribulations faced by Butler and Pashteen also illustrate a problem facing not just Pakistan but other countries in Southasia, authoritarianism versus constitutionalism, that the conference aimed to highlight.

From religious bigotry in India marked by a crackdown on Muslims, to Sri Lanka’s economic woes and food insecurity, to the plight of the Afghans, particularly women, discussions at the conference took up these and other issues like the impact of climate change, press freedom and creeping censorship, to transgender rights, enforced disappearances, and arbitrary detentions.

Most, but not all sessions, were streamed live. Many participants posted on social media with the hashtag #AJCONF2022

At this critical juncture, the deliberations provided a platform to voices calling for human rights and democracy not just around the region but also the world.

Organised by the AGHS Legal Aid Cell and Asma Jahangir Foundation in collaboration with the Supreme Court Bar Association of Pakistan and the Pakistan Bar Council, and other institutions, the two-day event brought together parliamentarians, government officials, international experts, diplomats, activists, lawyers, journalists, and members of the judiciary.

Most speakers were present in person, while some joined online – a hybrid model popularised by the Covid-19 pandemic.

Participants included four Indian delegates, who obtained visas with “great difficulty” as one of them told Sapan News later. It was an “agonising process” said another. Still, they were grateful to be present and able to connect and reconnect with friends and like minded delegates from around the region.

‘Be loyal to state not individuals’

In his inaugural address Justice Qazi Faez Isa of the Supreme Court of Pakistan noted that no one is above criticism, but the focus should be on individuals rather than institutions. For instance, “condemn me as a judge but do not condemn the Supreme Court, condemn a general who violates the Constitution by name but not the military as an institution, condemn a bureaucrat by name… do not condemn the executive of Pakistan.”

Participating in the opening panel discussion on ‘Constitutionalism? The Role of Institutions’, Justice Isa said that everyone has a duty to uphold the Constitution in accordance with Article 5, which demands that the Constitution be treated as the final authority in all matters of government and that it never be altered or discarded.

Pakistan Tehrik-e-Insaf Senator Ali Zafar added to this advice the following day, saying that even better than criticising individuals would be to criticise their actions.

Panels on Afghanistan highlighted the backsliding of that society, the absence of a functioning constitution, and the prospects for women to regain their civil rights and legal safeguards following the Taliban resurgence.

“On August 15, 2021, democracy died within 24 hours in Afghanistan in front of us”, said women’s rights campaigner and journalist Mahbouba Seraj, visiting Lahore from her beloved Kabul that she refuses to leave despite the pressures. “How is it conceivable that women have absolutely no rights to move, advance, take place, or receive an education in a country with a 20 million population?”

“Taliban good or evil”, commented Mahbouba Seraj, is the “question of the year”. She noted that while there are various Taliban groupings, they all have the same worldview. The difference is how they feel about girls’ education; some are in favour of it, others are not.

The Taliban “must win over the general populace” if they want the international community to recognise them as the Afghan government, said former Afghan Ambassador to Pakistan, Dr. Omar Zakhilwal. He advocated having a conversation with Taliban in-person, which may at least persuade their leadership or decision-makers to start seeing the importance of changing their course and why doing so would be in their best interests.

In answer to the question of how the international community can best help Afghanistan, Seraj reminded the audience that it was in fact this community which enabled the creation of the Taliban and their ascent to power in Afghanistan in the first place. It can be quite influential when it comes to Afghanistan but at this point, its lack of action is only benefiting the Taliban, she added.

Participants appreciated Afghan women for courageously speaking up for themselves and fighting for their rights.

At a panel on ‘Media under siege in India, Pakistan, and Bangladesh’ moderated by journalist Arifa Noor, senior journalist Hamid Mir questioned why PTM leader Manzoor Pashteen “is not allowed to speak on my programme”, Capital Talk on Geo TV.

An outspoken opponent of enforced disappearances, he also seized the opportunity to highlight the recent killing of a Brahvi poet named Tabish Waseem Baloch whose body was discovered in Nushki, Balochistan.

The murder came “as a slap in the face” of parliamentarians who had travelled to Balochistan last month and assured the grieving families of missing persons that their loved ones would not be killed in such encounters.

The calibre of Pakistan’s journalists, “their determination, bravery, and talent” is a “shining example in certain aspects”, said Steve Butler. He hoped that the country would be able to “reconstruct much of what has been threatened in recent years using this foundation of top-notch journalism and tradition.”

Tremendous commercial pressures over the media are severely affecting newsrooms’ independence and the “diversity of opinions within media organisations”, he added.

He noted that it also harms journalistic independence when media outlets align themselves with political parties.

Malini Subramaniam, an Indian independent journalist and former head of the ICRC’s Chhattisgarh branch, gave a brief summary of the circumstances behind India’s persecution of Muslim journalists, including Siddique Kappan, Muhammad Zubair, Rana Ayyub, and others.

Those in India who protest the government’s policies are told to “go to Pakistan”, she said, adding, “Here I am”. She has reported extensively from the conflict area of Bastar in central India where the outlawed CPI Maoist party operates. On the pretext of fighting the Maoists, the government has been rounding up innocent villagers, detaining them, and killing them extrajudicially in order to demonstrate their power. “The situation is strikingly similar to that in Balochistan.”

Taking the podium at the following panel on ‘Illegal and arbitrary detentions’, Manzoor Pashteen minced no words in critiquing Pakistan’s ”monarchical style of governance” including the role of the military and its generals.

The young Pashtun leader asserted that rather than respecting the courts of law, it is “Vigo cars” – a vehicle synonymous with enforced disappearances and arbitrary detentions in Pakistan – that are “managing this system… if you speak up, Vigo cars will come and talk with you rather than saying that the law, the constitution, or the court will take effect.”

His speech was met with raucous ovation from the audience as well as widespread online attention.

Barely 24 hours later, the PTI-led administration in Punjab filed a first information report (FIR) against Pashteen in a sedition case under PPC 140, 149, and 505 of the colonial-era penal code.

“Go and protest to those who can liberate him” retorted the foreign minister, hinting at the real power in Pakistan.

He termed it a victory for the democratic political process that Imran Khan was removed by constitutional means. “You may not like the fact that he was removed, but he is the first prime minister in Pakistan’s history to be removed like this” rather than by military means, presidential ordinance or the hangman’s noose.

At a time when a third of Pakistan is still reeling under unprecedented floods, he called for political parties and the media to focus on this as a nonpartisan issue to help the millions who have been affected.

This is a Sapan News syndicated feature available to use with credit to Sapan News Network.

Note on Southasia as one word: Following the lead of Himal Southasian, Sapan uses ‘Southasia’ as one word, “seeking to restore some of the historical unity of our common living space, without wishing any violence on the existing nation states”. Writing Sapan like this rather than all caps makes it a word that means ‘dream’.